Fair warning: I’m going on a little bit of a rant today.  Have you ever noticed this thing about Christian romance?  The author wants a “coming to Jesus story” and a “falling in love” story, and so what happens?  You have a gal who follows Jesus and a guy who doesn’t (or vice versa).  They start to fall for each other, but Christians aren’t supposed to date non-believers…that whole “unequally yoked” thing.  So they don’t date.  And then the other person decides to follow Jesus, and next thing you know, they’re a couple.  So you get someone who may have been serving God for a long time, dating a baby Christian.  Like, the minute she gets saved. Ok. Slight exaggeration.

This page contains affiliate links – they don’t cost you a penny, but they sure help to pay off those student loans!  For more information, please see my disclosure page.  Also, I received a review copy of this book. All opinions are my own. I have lots of opinions…I don’t need someone else to give them to me! =D 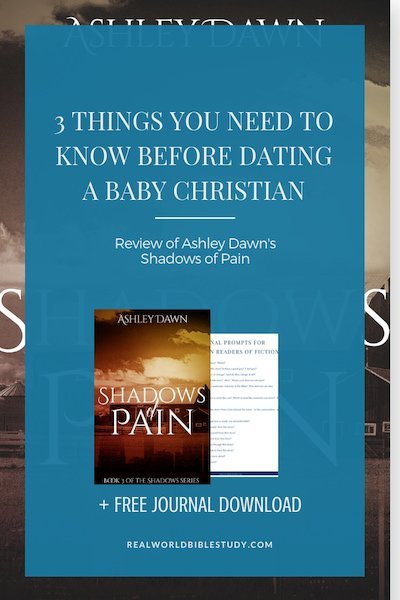 Last week I read Shadows of Pain by Ashley Dawn.

And it’s not really fair to pick on Ms. Dawn, because so many Christian romance authors do this.  I enjoyed this story.  I really like her characters.  (WHEN are we going to get Rick and Cassie’s story??  Geez.)  I loved seeing the soft side of FBI agent Kami, struck with fear when the killer has been in her own home.  Training doesn’t go out the window, but it’s such a different thing when that kind of work follows you home.  I also really love the way this “family” – both the ones that are related by blood and the ones who have adopted each other – pulls together.  I have a great family, but I’ve always been drawn to those stories of folks that come together and make their own families.

(By the way, I’ve reviewed book 1 and book 2 of this series here on the blog if you want to check them out!).

There are some things I don’t love – I think Ashley has great potential, but this work can still use some polish.  The interagency interactions don’t always strike me as realistic (how is it that Dee Henderson can convince me in the O’Malley series?).  There are some editing issues, and the descriptions tend to be overdone in some places and missing in others.  But then there is this thing that bothers me, the one that I shouldn’t pick on Ashley for because so many writers do it.  Even my beloved Dee Henderson.  But I’m still going to bring it up because I think we need to talk about it.  The thing about dating a baby Christian.  And the way Christian authors so often write about it.

When a Fictional Character is Dating a Baby Christian…

These stories rarely show the imbalance that happens when a mature believer gets romantically involved with someone who is brand new to the faith (or even someone who has been a “Christian” for a long time but hasn’t grown his/her faith).  That imbalance creates a strain on the relationships involved: the relationship between the couple, and between each person and God. It’s not that the characters made a bad choice…its that they made a bad choice and it looks like a good one.  When Christian writers have their long-time-believer character dating a baby Christian (often a few days after the person decided to follow Jesus), it can make it seem like this is the good, healthy way to do things.  And it’s not – for either person.  Take it from someone who has been there.

3 Things You Should Know Before Dating a Baby Christian

You don’t want to be in a romantic relationship with someone whose faith is all tied up with yours from the beginning.  Be with someone who is grounded in God first, independently of you, so that you can lift each other up in the tough times.  You want him to have his own Christian friends, his own prayer life.  Otherwise, if your faith is struggling, you’re going to pull him down too, and he won’t be in a place to lift you up.  You want to be on the same page – not just about whether you believe, but on similar maturity levels and growing in the same direction too.

And before you start dating a baby Christian, remember that he or she may not have learned to set the same boundaries in dating that you have…may not yet even understand why you want to set those boundaries.  Trust me: you definitely want to know you are in agreement in that area!  Don’t make the assumption that because a guy or gal chose to follow Jesus, he or she instantly is on the same page as you in terms of sex! 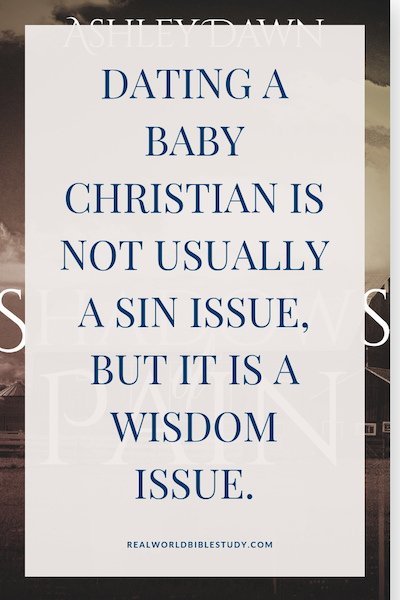 In all relationships, there is going to be some give and take, some teaching each other, even some helping each other follow Jesus.  Especially some helping each other follow Jesus.  But the key phrase is “each other.”  If you are dating a baby Christian, you become the teacher.  That means that, whether you mean to or not, you’re always going to be in a “superior” position, telling her how to live or how to follow God.  Even if you’re not actively saying it, your relationship will always be lopsided, which isn’t healthy for you and it can be REALLY hurtful to the person you’re getting close to.  It’s not on purpose. It’s just the nature of things.  You want to be with someone who is also willing and able to teach you how to follow God.

#3 Dating a Baby Christian is Not Usually a Sin Issue, but it is a Wisdom Issue

And it may become a sin issue.  Dating a baby Christian could let him get more wrapped up in you than he is in God – not on purpose, but just because you are beautiful and distracting, and he hasn’t had time to build a solid foundation.  Do you want to cause “one of these little ones to stumble?”  And on the other side, because his faith is new, he may need some time to learn to date or court in a way that honors God.  (You don’t want to be the one to teach him).  How many of us have gotten fuzzy on our own standards to meet the expectations or the invitations of someone who is trying to follow God but isn’t really grounded yet?

Give It Some Time

If you want to ask a girl out, but her faith is brand new, just wait.  If she’s the right one, she’ll still be around when she’s had some time to grow into her new relationship with Jesus.  How much time?  That depends. Don’t wait forever :), but seek wise counsel.  And if someone asks you out, and you are interested, but his faith is really new, tell him to ask you again in 6 months or so.  You can even say “I’m not ready,” because it’s true!  You’re not ready to be with someone who isn’t ready to be with you.

And seek wise counsel.  This is where I always mess up…trying to make decisions when I can’t be objective.  Talk to someone who is wise, mature, has a strong relationship with God, and knows you both.  Someone who loves you enough to tell you the truth.  It doesn’t have to be a rejection, and while it might be disappointing, the real deal is worth waiting for.  If he, or she, doesn’t think you are worth the wait…well, that should tell you something too.

If you’re already dating a baby Christian? I think that would be another “seek wise counsel” thing.

Back to Shadows of Pain.

Plot-wise, there was mostly the one thing that bothered me about reading Shadows of Pain.  Y’all, it is literally days from when Daniel decides to follow Jesus to the start of their “dating” relationship.  (No spoilers, this is pretty much how the book starts).  She doesn’t have any reason to doubt his conversion, but it’s just way too soon.  He accepts Jesus, now a switch is flipped and suddenly dating is fair game.  And everyone around them encourages it, too.

When does the journey end?

I think the reason this bothers me, aside from the discussion above about dating a baby Christian, is that there is an assumption that when someone decides to follow Jesus that’s the end of the story.  That’s as sad as saying that when a couple gets married it’s the end of the story.  Some things really do instantly change when we decide to follow God, but the decision isn’t the arrival point, it’s the beginning of the journey in so many ways.

As you can tell, I have opinions about this topic.

I think I’m done with my rant now :).  Would I recommend this book?  Yes.  There is still some inexperience on the page that you might have to get past, but there’s only one way to get experience as a writer…we have to write, and get feedback, and write, and get feedback.  I’m cheering Ashley on as she writes and grows.  (And by the way, her other books I’ve reviewed don’t have this “dating a baby Christian” thing.  Sometimes you get a believer who has rejected God and comes back to faith, but I think that situation is a little different.)  I found myself wanting to know about the characters and what would happen in the next book (which I’ll be reviewing next week).  If you enjoy some fun, some romance, and some suspense, you would enjoy this story. 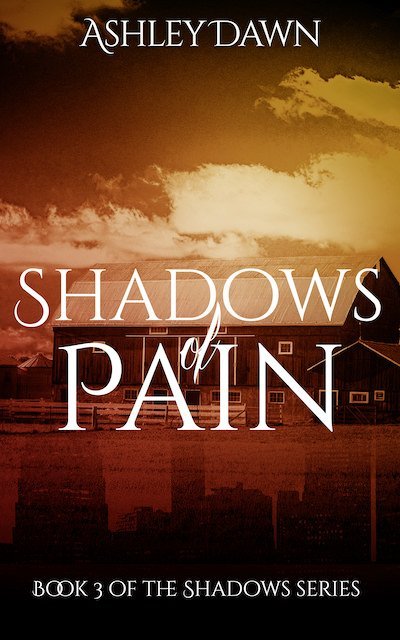 About Shadows of Pain

Revenge is sweet…unless you are on the receiving end of it.

“Do you know of anyone who would want…you dead?”

Officer Daniel Jenkins was no stranger to the dangers his job posed but usually he knew who was trying to kill him. Being stalked was a completely different ball game, and he wasn’t sure there were any rules…

Terrified didn’t even begin to describe how Kami felt with the stalker targeting her. As an FBI agent you were trained to handle stressful situations, but being the victim put the whole process in a different light.

As the killer gets closer, so do Kami and Daniel, but will they live long enough to see their love bloom?

Only God can save them from this unknown killer…

Author Ashley Dawn was born and raised in rural Arkansas where she developed her love for writing while helping in her parent’s office. She graduated with an accounting degree from the University of Central Arkansas but is currently working as a legal assistant.

Ashley has been writing professionally for the past twelve years and has four published books. Her Shadows Series include Shadows From The Past, Shadows of Suspicion, Shadows of Pain, and Shadows of Deception. She is currently working on multiple projects including the fifth in her ‘Shadows’ series entitled “Shadows in Black and White” and also a standalone suspense titled ‘One of Their Own’. She an­­d her family make their home in Texas.  You can find Ashley on Facebook, Twitter, or at www.ashleydawn-author.com. 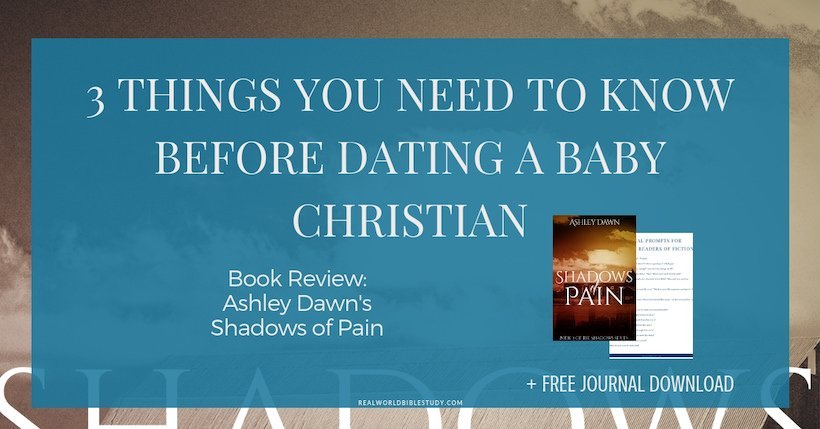 « How to Have an Undivided Heart
What did I think of Ruth: Redeeming the Darkness? »