Don’t yell at me.

If I’m looking through a newspaper, I enjoy the funnies as much as the next person. But I’m not really much of a visual consumer, and if I’m going to take in a story, I want as many words on the page as possible, unless I’m listening to an audiobook, which might be even better.  But here’s the thing: I believe in comic books and graphic novels.  I love the idea of a graphic novel Bible. I think it’s an awesome way to tell stories, to express the creativity God has given artists, to get people reading.  I’m really big on figuring out your learning style and using that as much as possible. I think that a graphic novel or comic book Bible could be a great way for visual learners to engage with God’s Word. So when I saw an opportunity to review the Word for Word Bible Comic: The Gospel of Matthew, I knew I needed to make it happen.

And at the same time, I knew I wasn’t the right person for the job.  I could tell you if the Scripture was accurate, but I couldn’t tell you if this graphic novel Bible was worth your time. Fortunately, I knew just the right person for the job.  I hope you enjoy this guest post by my friend Simon Yoo.  (I hear he’s working on a graphic novel of his own, too!)

This post may contain affiliate links. They don’t cost you a penny, but they sure help pay to keep this site running! For more information, please see my disclosures.  Also, we received a free review copy of this book, but that did not influence the content of this review. Because, hello? That’s not how we do things around here. 😉 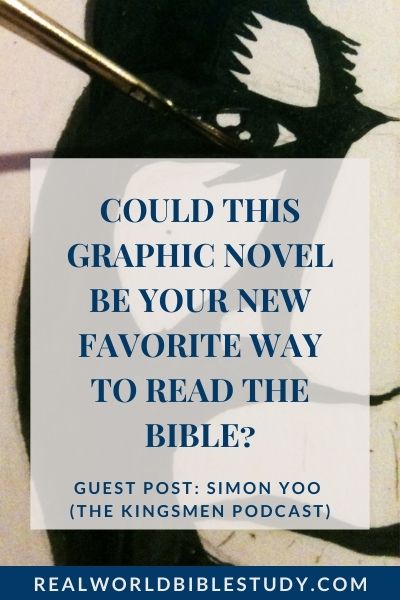 Book Review of the Word for Word Bible Comic: The Gospel of Matthew

Many of my childhood memories that I can remember vividly occur in the early to mid ’90s. Such memories are the premiere of X-Men: The Animated Series in 92 and then the following year, Mighty Morphin’ Power Rangers. I grew up on a healthy diet of sugary cereal, Saturday morning cartoons, and staying up all night playing video games or reading comics (and most possibly doing both). This constant bombardment of nerd debauchery in my life has been deeply ingrained into my psyche to the point that it has left a permanent indelible mark upon my imagination that has been nourished and cultivated during my theological training. It has become one of the major interpretive lenses that I see Holy Scripture through.

So one can only imagine the great delight and curiosity that came upon me when I heard about Simon Amadeus Pillario’s latest addition to his Word for Word Bible Comic, the Gospel of Matthew. It is this latest work that introduced me to Pillario and his journey that he embarked on with his first work on Judges. And he did so rather admirably by garnering funds in a very grassroots sort of way via crowdfunding on Kickstarter.

Pillario is a Man After My Own Heart

As much as I could glean from the internet about him, I found that the writer is a man after my own heart. In a 2014 interview with Creative Kingdom, one of Pillario’s major influences is Hellboy creator Mike Mignola of whom I also have been a lifelong fan. Other interests that he mentions are watching television shows like Marvel’s Agents of S.H.I.E.L.D and participating in historical re-enactments. Pillario is a nerd. Now, please, don’t get me wrong. I use this term with the utmost respect. He has found a crossroads that connects his love with many things that are pop culture and the devotion to his Christian faith.

Pillario aims to accomplish three objectives with these graphic novels.

The first is evangelistic: “to reach the rapidly increasing comic fan base with God’s word as [Pillario believes] non-Christians will be happy to read the Bible if it is in a dramatic comic style.” Following this is the objective to provide a novel and creative medium that could invite readers, young and old alike, to a better understanding of the biblical text. And finally, the third objective is to provide an “unabridged” telling which Pillario means as “no parts of the stories are overlooked or avoided.” Due to my limited access to the information, this review cannot address if Pillario’s first aim has been objectively accomplished. So, therefore, this post will not address it. My aim is to share my thoughts and opinions on if he successfully executes the latter two. I will then conclude this post with my overall review.

When reading through the introduction along with the biblical background information towards the end, it is apparent that Pillario has taken great care and attention in creating this graphic novel Bible as a way to better explain the gospel. One of those key attention to detail is a sincere attempt to draw the world of Jesus with historical accuracy. From the architecture, the physical features of the people, all the way down to the clothing, the graphic novel provides a sense that you could possibly be seeing what it was like in first-century Israel.

Along with these features, Pillario paints cultural practices and rituals that correspond to the historical setting of the time. One example of this is during the Christmas narrative in the gospel’s beginning that showcases a first-century Jewish wedding celebration of Jesus’ parents. By adding this extra effort to the graphic novel, the reader has a great opportunity to see this Gospel through the lens that is closer to its initial first-century audience than our own.

The graphic novel as an art form is a quite unique medium because it is an intersection between visual and written communication. The advantage is that both complement each other providing strength for each other’s weaknesses. It is this very reason that Pillario vividly brings the gospel of Matthew to life without leaving anything out. 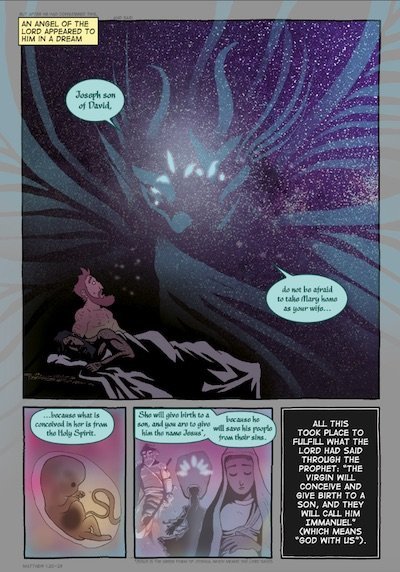 Though a cliched expression,  it is appropriate to say that this graphic novel tells it like it is. Folks may not realize when reading Matthew the many violent moments in the gospel. This does not suggest in any way that the text condones such violence, but tells it as a matter of fact that happened during the life of Jesus. Pillario does not omit anything for the sake of a particular audience. His intention is not primarily to offer an amended version just to provide something palatable for a specific age group. Rather, Pillario does something rather novel. He just tells the story with all its shadows and rough edges. From the slaughter of the innocent in the second chapter to the beheading of John the Baptist in fourteen, and ultimately the crucifixion and death of Jesus at the conclusion. Pillario’s telling does not hold any punches.

Joy’s note: It sounds like Pillario has captured one of my favorite things about Scripture: the fact that it is real and fits in with our broken, messy world.

I cannot think of any other graphic novel that takes on the challenge in the way Pillario has.

Many who embark to create the Jesus story would do so by harmonizing all gospel accounts into one work. Though the motive to do so is perhaps always driven by good intentions, the unfortunate consequence often waters down the story that each gospel tells rather than enhance it. As readers, we have in the New Testament a collection of four gospel tellings unique from one another. Though all have many things in common, each one is presented with a particular motive by the original author which is lost when we try to amalgamate them as one narrative. Pillario preserves as best as he could from his research the author’s voice of Matthew’s gospel by not treading outside its boundaries.

It is quite apparent that the design and layout of the graphic novel has been done with great care.

One such example is the transition from the narrative to the telling of a parable signaled often by a purple hue or flashbacks that are colored in a dichromatic sepia-tone. Another is the paneling of the comic pages that provides an enhancing effect to the telling of the story especially when the disciples flee at the time Jesus gets arrested by the Sanhedrin.

If I may be candid, I am not fond of Pillario’s art. This is at no fault to him but simply a statement of my own preferences and artistic taste. However, the story’s inherent attraction and beauty had a way that went beyond my own personal creative dispositions. There were moments reading through the graphic novel that I was moved to tears in a way that I haven’t experienced the written text for a while. One in particular that I remember so vividly was the Gadarene Demoniac, Jesus’ unrelenting drive to set him free, and the restoration of a human being long forgotten and neglected dwelling among the dead. Overall, I highly recommend Pillario’s telling of the Gospel of Matthew.

Based in Bristol, England, Simon Amadeus Pillario has a degree in graphic design and has been writing comics for over 15 years. He became a committed Christian at the age of 23 and after reading the Bible as an adult was struck by how much of the exciting intrigue, drama and challenging elements are dropped from dramatizations and retellings of the stories. Passionate about the full Word of God and unsatisfied with the cut-down, child-friendly Christian comics available he was inspired to create this product for adult readers.  Learn more and follow Simon’s blog here. 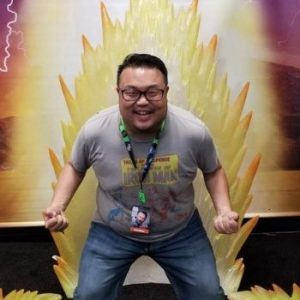 From comic books to video games, much of Simon Yoo’s imagination has been nourished and cultivated from this pop culture immersion continuing impactfully through his theological and biblical training and then beyond wherever God has led him. He has discovered many things along the way, two of which are worthy to note: Creation itself has been rescued by a Heroic God and it is Simon’s pursuit to discover more of Him.  You can find Simon talking theology and pop culture over at The Kingsmen Podcast.

« What is a devotional Bible, and do you need one?

Y’all, it’s been far too long, but I finally g

Not just rom-com. This book also hits some tough i

Girl Pastors Game Night. Next one in Orange Count

3 questions More Than Words Can Say made me ask. R