How the Story of Hagar Shows the Importance of Charitable Works

Y’all, I’m so excited to share this guest post by my good friend Nicole Haschke of Knitting for Charity.  When she asked to do a post about one of my “most-favoritist” Old Testament stories, I did the happy dance. In my pajamas. 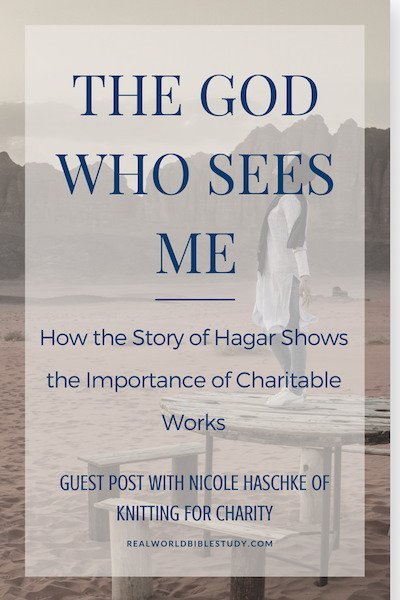 Using story is one of my favorite learning methods for Bible study because stories touch us in a way that bullet points and abstract ideas just don’t.  The story she shares is heartbreaking and sometimes disturbing. And yet we see God step into the very real world life of an invisible girl whose story would change forever.  How will God change your story? – Joy

How could the ancient story of Hagar, an Egyptian maidservant, possibly inform our works of charity today?

Most of us are familiar with the story of Abraham, the grand patriarch of the Jewish faith, and how God promised him (and his wife, Sarah) that his descendants would outnumber the stars.

Most of us are also familiar with Sarah (then known as Sarai)’s doubt that this would happen. It’s not hard to understand why! She and Abram (as he was then called) were well into their 80s. So convinced was she that she would never have children that she did something that you and I would find distasteful today, but was common practice in the ancient times in which she lived.

Sarai gave her maidservant Hagar to Abram so that Sarai could have a child through her. (”Maidservant,” I suspect, is a mild way of saying that Hagar was Sarai’s slave.)

The Story of Hagar: a Pregnant Slave on the Run

He [Abram] slept with Hagar, and she conceived.

When she knew she was pregnant, she began to despise her mistress. Then Sarai said to Abram, “You are responsible for the wrong I am suffering. I put my servant in your arms, and now that she knows she is pregnant, she despises me. May the Lord judge between you and me.”

“Your servant is in your hands,” Abram said. “Do with her whatever you think best.”

Then Sarai mistreated Hagar; so she fled from her.

Anyone who’s ever seen a daytime talk show (or read an advice column) could’ve seen all this coming, right? It’s not surprising that after becoming pregnant by Abram, Hagar would see Sarai as her rival. And of course it’s not surprising that Sarai would then treat Hagar harshly. (And are we surprised that Abram tried to wash his hands of the whole sordid affair? Of course we’re not!)

What happened next troubled me for quite some time, until I began to look at it differently.

Back to Genesis 16, starting with verse 7 and running to 14.

The angel of the Lord found Hagar near a spring in the desert; it was the spring that is beside the road to Shur. And he said, “Hagar, servant of Sarai, where have you come from, and where are you going?”

“I’m running away from my mistress Sarai,” she answered.

Then the angel of the Lord told her, “Go back to your mistress and submit to her.” The angel added, “I will so increase your descendants that they will be too numerous to count.”

The angel of the Lord also said to her:

“You are now with child and you will have a son.

You shall name him Ishmael, for the Lord has heard of your misery.

He will be a wild donkey of a man; his hand will be against everyone and everyone’s hand against him,

And he will live in hostility toward all his brothers.”

She gave this name to the Lord who spoke to her: “You are the God who sees me,” for she said, “I have now seen the One who sees me.” That is why the well was called Beer Lahai Roi [which means Well of the Living One who sees me]; it is still there, between Kadesh and Bered. 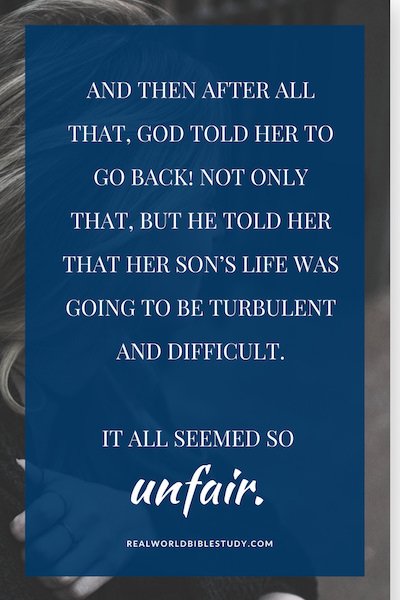 Hagar’s Response to the God Who Sees

Okay. So at first this story made me sad. Hagar wasn’t exactly innocent in this situation, but she was the one who had no power. She likely couldn’t have said “no” when Sarai told her to sleep with Abram, even if she’d wanted to. She became pregnant, which is exactly what Sarai wanted to have happen. And then she was mistreated to the point where she felt she could get relief only in running away.

And then after all that, God told her to go back! Not only that, but he told her that her son’s life was going to be turbulent and difficult. It all seemed so unfair to me.

But the one thing that stuck in my head was Hagar’s response. She did return to Sarai, but not before she gave God a very personal name. (Joy pointed out to me that Hagar was the first person recorded in Scripture to give God a personal name. That’s huge!)

Yes, from my 21st century, comfortable middle-class American existence, Hagar’s situation and the prophecy spoken over her unborn son seemed terribly unfair. But that’s not how Hagar — Egyptian slave and concubine, the lowest of the low in her culture — saw it.

Instead, she spoke — I imagine, in awe and wonder — of “The God who sees me.”

Also, there was the prophecy. Yes, the man her son would grow into would face trouble. But God also promised Hagar that through her son she would have many descendants. Jewish culture always equated children with divine blessing. So for her to have many descendants meant that she was incredibly blessed by God. 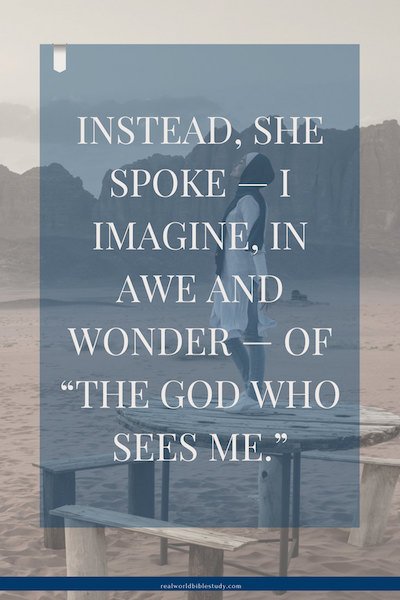 I suspect, now, that far from feeling frustrated by the unfairness of it all, Hagar returned to Sarai with new hope and maybe even a straighter posture. She had been seen by God, and she had been richly blessed by God.

She was even heard by God, proven by the name that God’s angel told her to name him: Ishmael, or “God hears.”

Did her misery go away? Probably not. Hagar was still carrying the child of her mistress’ husband. She might still feel jealous of Sarai, and it’s almost certain that Sarai considered to feel jealous of Hagar. Maybe she even continued to mistreat her — we don’t know.

But in her misery, Hagar was seen and heard and blessed. She was on a first-name basis with the God who sees.  And it made all the difference.

How We Can Make a Difference through Our Blessings

Since I became a charity knitter, and begun blogging at Knitting for Charity, Hagar’s story has come to life for me in a new and deeper way.

Charity crafters reach out to people in need in a variety of ways. I’ve seen nearly every kind of knitting initiative you can imagine!

(If you want more ideas for getting started with charity knitting, you can check out my free email course here).

The same “God who sees me” sees them in every rough turn and painful day.

And one thing unites nearly every recipient of a gift of handiwork: a tremendous gratitude that a stranger would take the time to make something they needed.

In other words: the joy of knowing they are seen. And they have been blessed. 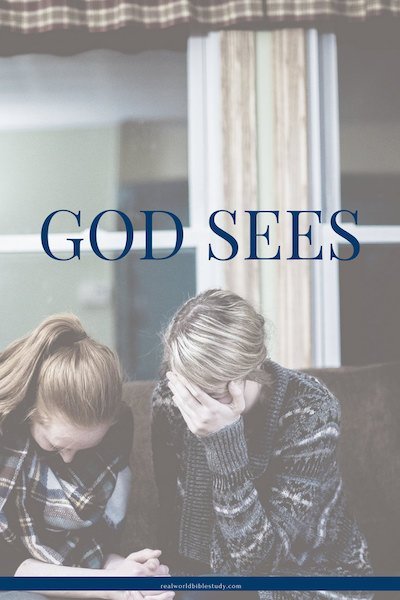 Anyone Can Be a Blessing!

You don’t have to be a yarn crafter to offer your blessings to someone in need, of course! Any act of service does the same thing. Volunteering in a homeless shelter, a soup kitchen, a school, a church. Helping in food pantries or clothing closets (ie, the kind that offer clothes to needy folks free).

If you offer yourself in any kind of service to anyone else, you’re letting that person know that you see them, you love them, and you want to bless them.

That’s what makes service such a sacred act. I suspect this is exactly why God, through His son Jesus, called us to love as Jesus loved. And all throughout the chronicles of Jesus’ life, it becomes abundantly clear that this “love” wasn’t just a feeling; it was an action.  Our world often feels so far from God, so out of his sight or his attention.  If we are the hands and feet of Jesus in our world, how better to represent the “God who sees?”

So if you love to work for charitable causes or organizations — whether it’s through knitting, crocheting, another craft, or in a myriad of other ways — know that you’re performing a sacred work that has been blessed by Jesus Himself. And know that you are offering a great gift to others: the gift of being seen.

Wasn’t that awesome?!  Thank you Nicole! One of my favorite things about the story of the God who sees is that God doesn’t just see Hagar in her distress; in the next chapter we find out that he sees Sarah, despite all her mistakes.  She couldn’t mess things up badly enough to make God give up on her.  So when you encourage someone, whether the victim or even the perpetrator, the God who sees is working through you to raise them up and give them hope.

If you want more from Nicole, you can check her out at KnittingforCharity.org or on Facebook, Twitter, or Instagram.  And don’t forget to check out her FREE email course,  Getting Started with Charity Knitting! 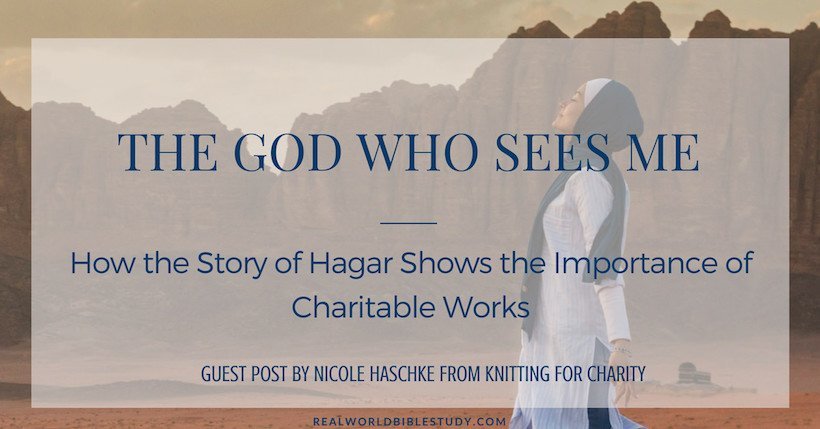